Marine Antiquity of the Month for December 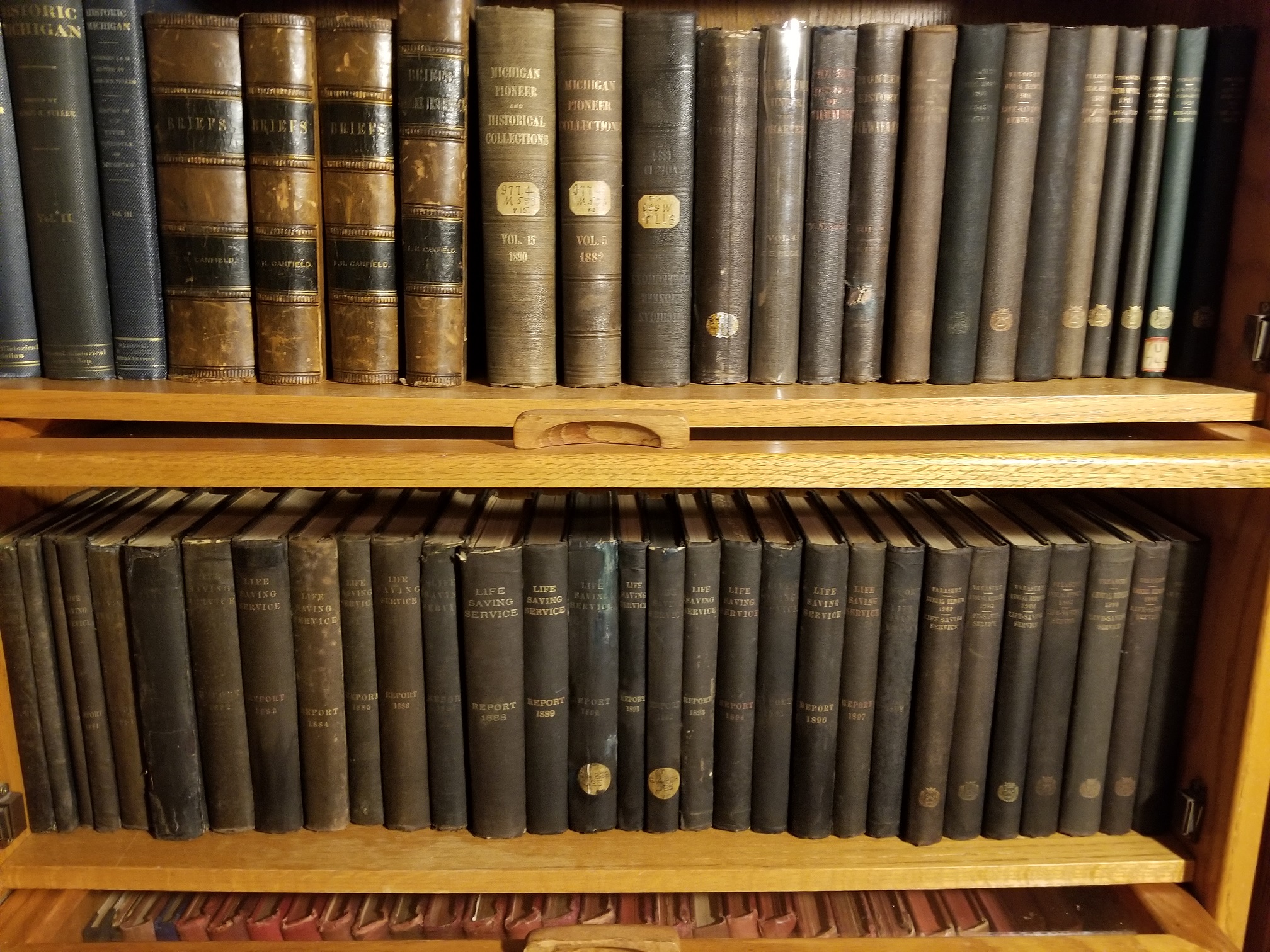 The Marine Antiquity of the Month for December is the annual reports of the US Lifesaving Service.  These books were produced each year, bound in black cloth, between 1878, when the Service was established and 1915, when it was absorbed into the newly established US Coast Guard.  The reports of the US Lifesaving Service are extremely important for researching accidents that occurred around major ports and places where lifesaving stations had been established.

Each annual report contains a few very important sections as well as several sections of fairly un-interesting statistical and instructional information.  The main section people reference is that containing the detailed narratives of shipwrecks at the front of every annual report.  Detailed narratives were only created for wrecks involving a significant loss of life and represent a small percentage of the actual services rendered in a given year.  Still, these narratives are very detailed and often dramatically written to draw attention to the perilous nature of the Life Saving Service’s work. 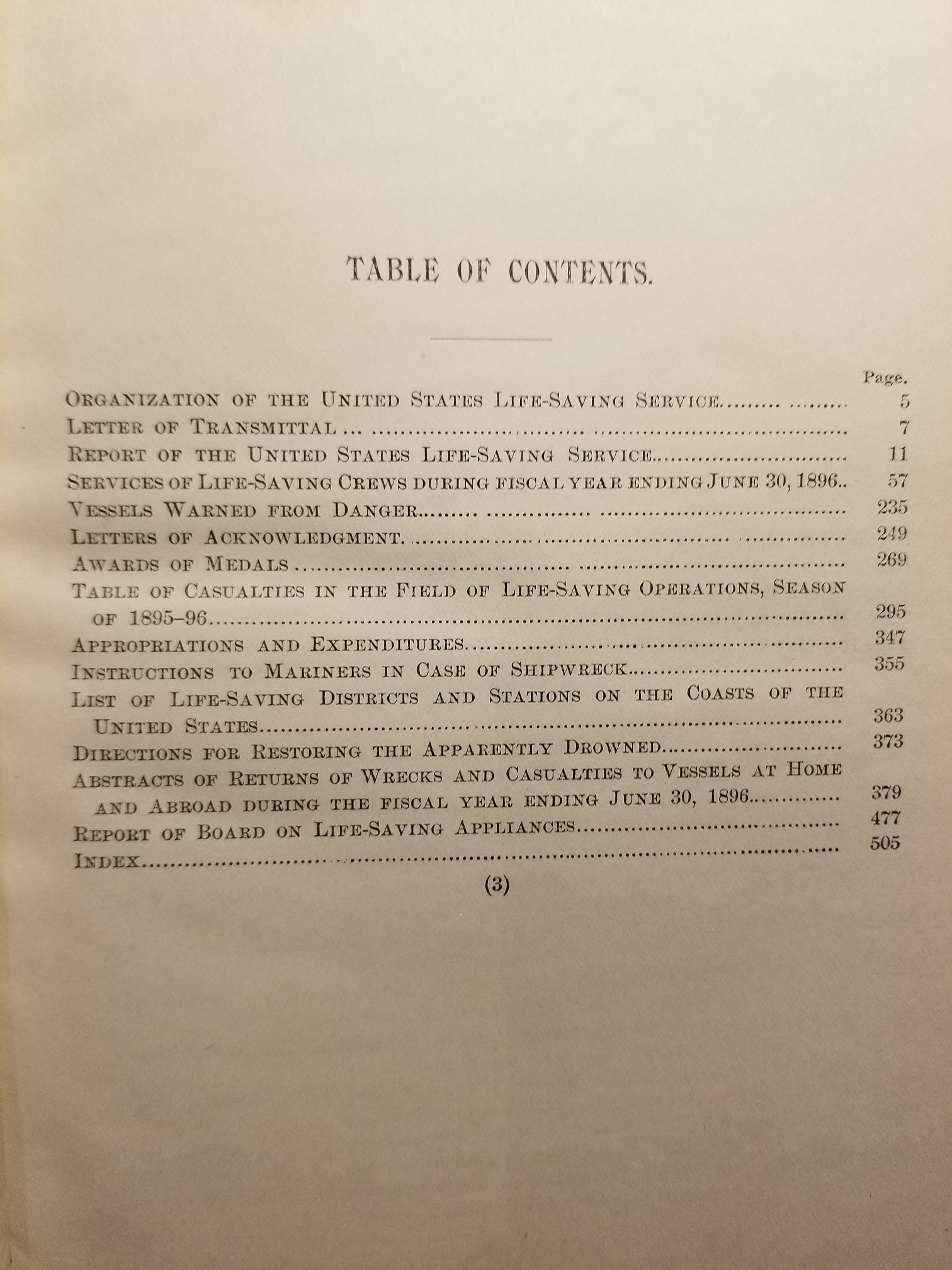 The next section people often reference is that of the tables of Services Rendered by date.  These tables give a surprising amount of information, including vessel names, accident locations and more detail of services rendered. These tables are essentially abstracts of accounts taken from the Station Logs for each life saving station that year.  The original hand-written logs for the Great Lakes stations are housed at the National Archives Chicago Office, but the details in the printed Annual Reports are relatively faithful, if abbreviated, versions of the original log accounts.

This is followed by a section giving a detailed table of services by stations in each Lifesaving District.  These tables are the most convenient for locating Great Lakes specific calls, as the Lakes comprised their own districts, District 10, comprising the stations on Lakes Ontario and Erie, District 11, comprising the stations on Lakes Huron and Superior and District 12, comprising the Lake Michigan stations.  It is quick to scan these tables for all the accounts of a given station or stations of interest.  These tables give additional details about the nature of the service rendered that are not in the chronological tables. 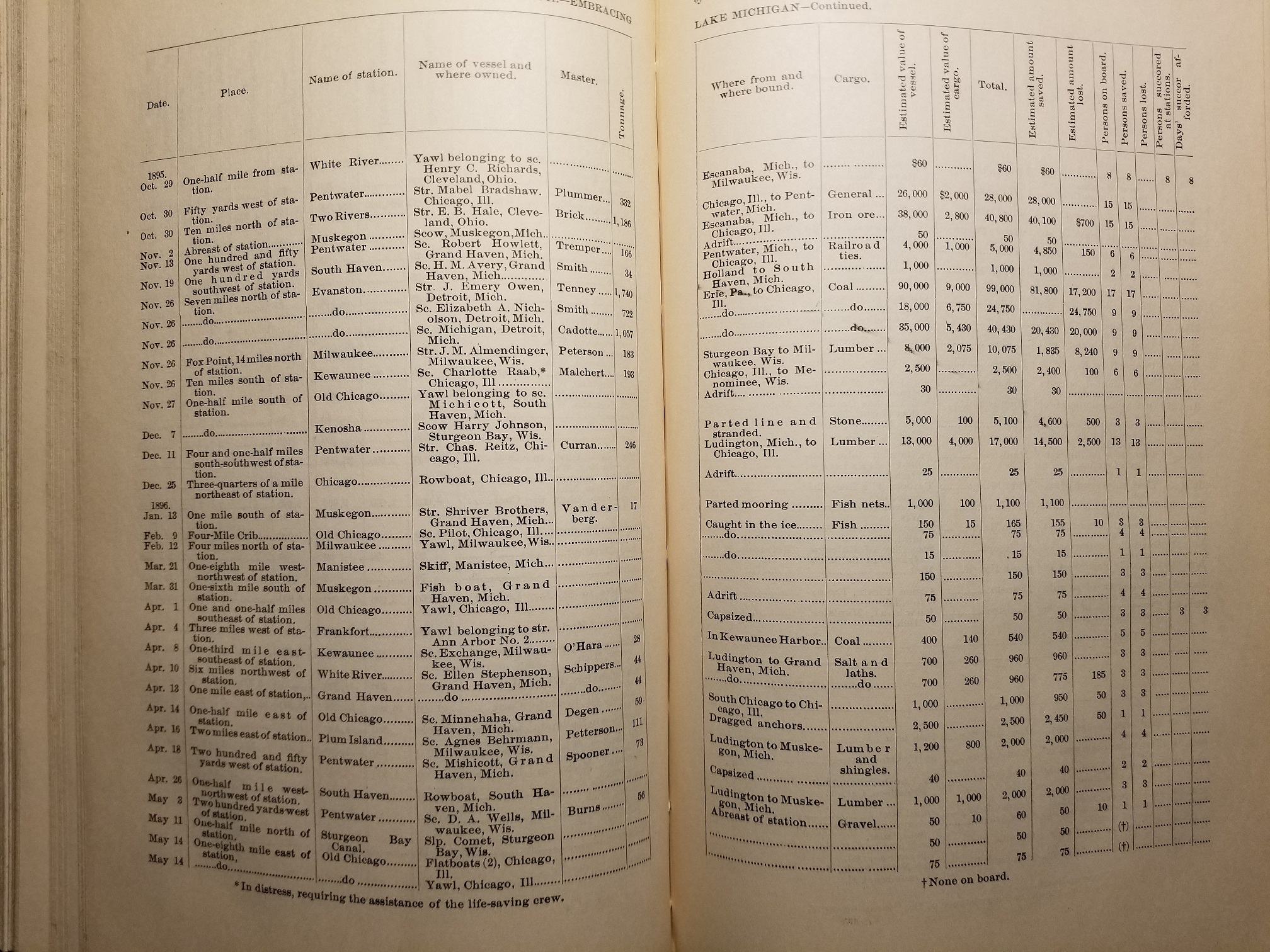 One additional table I find interesting is a table of places that wrecks have occurred.  It gives counts of known wrecks that the Lifesaving Service were called to by locality since its inception.  I have included an example in the attached images.

The Annual Reports span a period of nearly 40 years, but are remarkably consistent, owning mostly to the fact that the Lifesaving Service had the same superintendent, Sumner Kimball, throughout its existence. 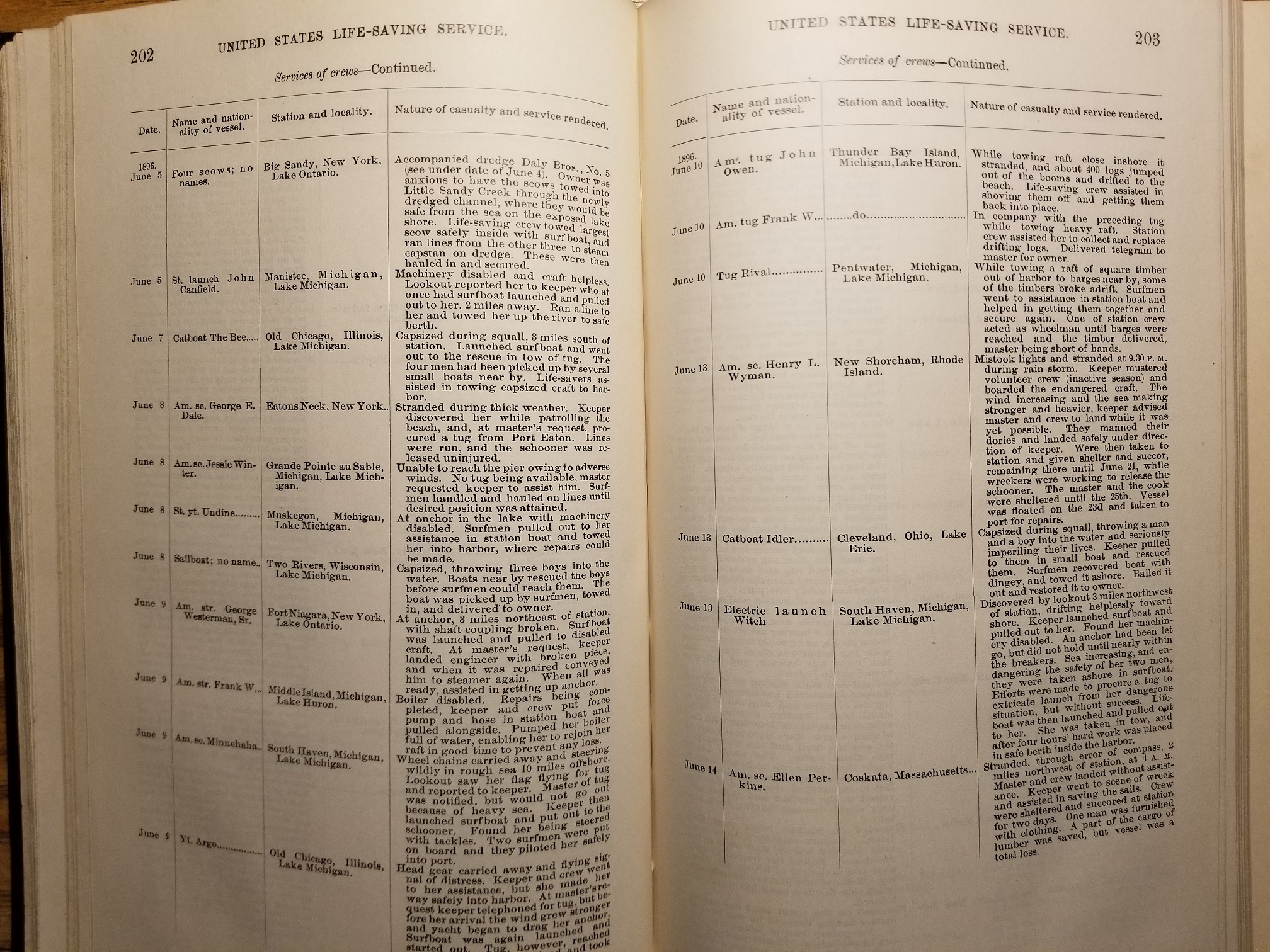 I find the Annual Reports particularly interesting for researching the many small, local vessels that frequently ran afoul.  It is clear from reading the reports that many stations had “frequent flyers,” in the form of local yacht and motor launch owners who lacked the necessary skill and judgement to safely operate their vessels.  The stations were regularly called to rescue pleasure boaters that had stranded, capsized or otherwise broken down.

It is important to note that only accidents which were responded to by the Lifesaving Service are referenced in the Reports.  Many accidents, even those which happened very near the stations, did not result in a call to the Lifesaving Service.  As such, one is often disappointed to find no account of some well-known wrecks.  Conversely, the Reports contain many wreck accounts that were not in the media of the day and are not otherwise available.  The reports can consequently, be a real gold-mine for those researching the maritime history of a given port. 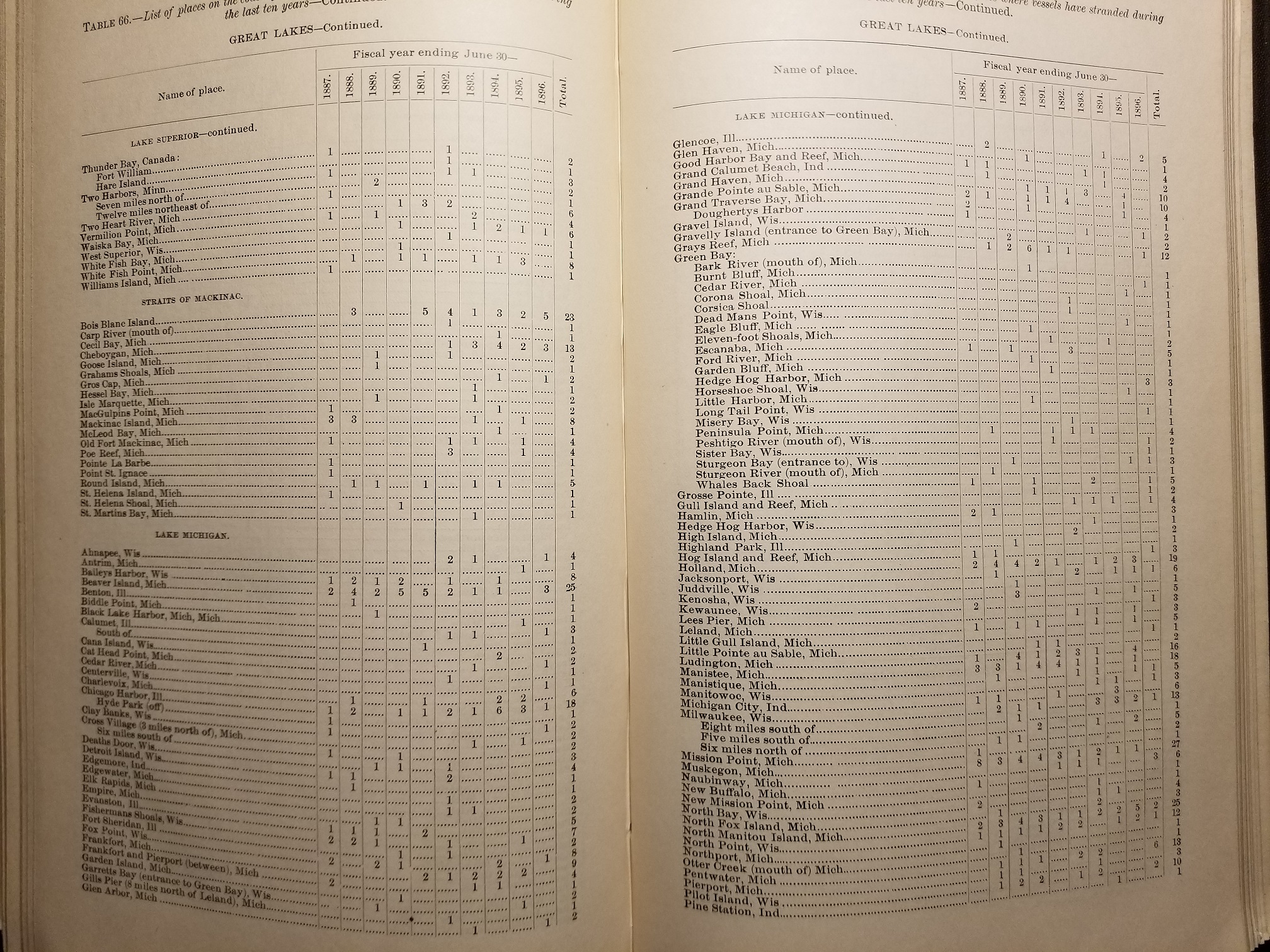 My own collection of the reports contains all the volumes from 1878 to 1915, including those for the early years (1878-81), which were published in both original and abridged versions.  The abridged versions, lacked the service call abstract tables, and are much shorter (and more common.)  I collected my copies over many years and had to spend a great deal of time restoring them, as the cloth on the covers tends to become brittle with age due to acidification.  This causes the spines to easily chip off if roughly handled.  I have digitized all the call tables for District 12 (Lake Michigan) from all years and I now use the images for most of my research rather than handling the original reports.  The digital collection is comprised of 126 page images, but is not indexed by vessel or station.  I am willing to share it with Lake Michigan researchers who send me a thumb drive in a self-addressed stamped envelope.

The Annual Reports of the US Lifesaving Service have gotten much more difficult to find in recent years, as more people have started to collect Lifesaving Service memorabilia.  They tend to fetch around $125 per book in good condition, but are still offered for sale occasionally.  If anyone is interested in acquiring originals, let me know, as I do have some duplicates in fair condition.