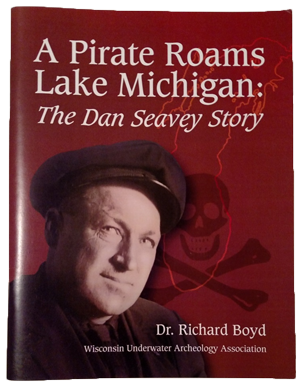 In the maritime history of the Great Lakes, only one lake captain was ever arrested by federal authorities for piracy. That mariner was Captain Daniel W. Seavey, who frequently prowled upper Green Bay, but also wandered far and wide across Lake Michigan where his raucous exploits and pugnacious nature became legendary. His most infamous deed was the theft of the schooner Nellie Johnson in 1908, which led to a lengthy pursuit up Lake Michigan by a federal gunboat, hot on Seavey’s trail.

Seavey has occasionally been the subject of “short story” articles that briefly described some of his misadventures, but this essay is the first in-depth look into his life and background, examining how he became known throughout the region as “Dan the Pirate.” The book provides many new, well-documented insights into the escapades of this roguish seaman, whose biography reflects the very definition of piracy itself. The text is generously supplemented with many interesting newspaper excerpts and photographs that highlight Seavey’s nefarious activities.